HOW THE MEDIA CAN MOUNT A WAR AGAINST VOTER SUPPRESSION. Horse race coverage means nothing if the race is rigged. 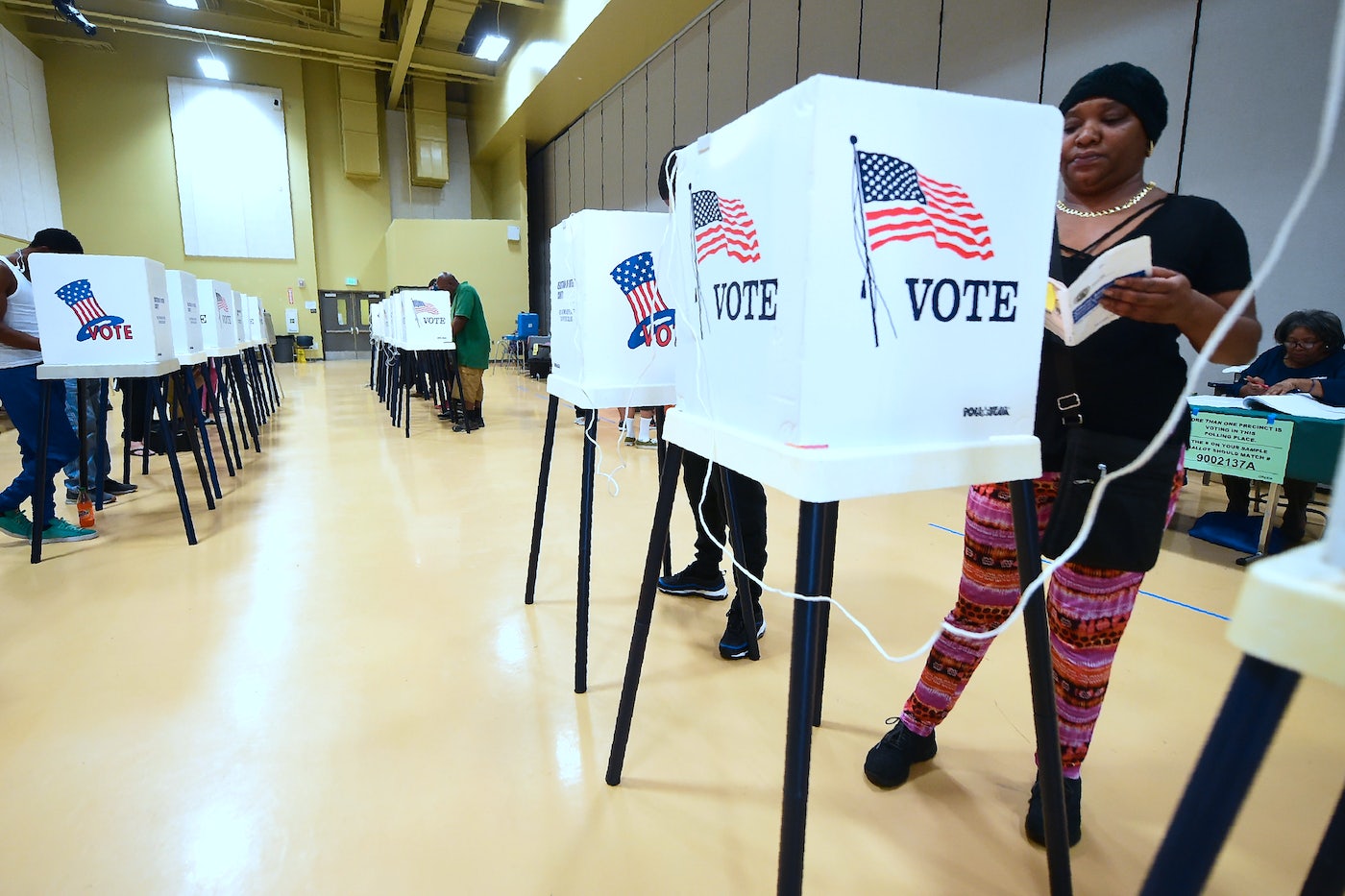 I get excited, a tiny blast of dopamine goes off in my head anytime a cable news host says, “New swing-state poll numbers coming up after the break.” Admittedly, the effect is enhanced when the numbers show Biden up by 13 points in Pennsylvania and tanks when he drops to four. But over the years, it’s gotten so that I get a buzz from the very word poll, its letters for a moment spelling hope.

The anchors and panelists who dole out the numbers seem excited, too, as they bat around approval ratings and cross tabs, percentages and predictions. But in the thrill of the horse race, it’s easy to forget that the stables are in flames. Television, which is still Americans’ preferred platform for getting the news, rarely mentions voter suppression within a 10-minute radius of a poll, despite the fact that it could render much of the polling meaningless. It’s as if restrictive voter ID laws, roll purges, and Trump’s regular assaults on mail-in voting bear no relation to the polls; their shiny, boldface numerals never quite touching the muddied facts on the ground.

It’s not that national news shows ignore voter suppression. It’s that they report on it reactively, their impetus lacking the same fervor of their polling coverage, where there’s a passion for getting out in front of voter trends and analyzing every startling outlier. When it comes to voter suppression, however, the media operates in fits and starts. For days at a time, they’ll be all over the big, in-your-face stories, like the outrageously long lines in Georgia’s April primaries or Trump’s postmaster general dismantling the post office. But when the breaking (and usually Trump-centric) news subsides, coverage of the GOP’s ongoing, many-headed scheme to disenfranchise millions of voters goes quiet.

Network and cable news have picked up some of the slack of late, shining stronger spotlights on voting issues—and doing so more intensely since the pandemic began to expose the cracks and craters in the election system. Over Labor Day, NBC News/MSNBC launched “Vote Watch,” occasional, dedicated segments on the obstacles to voting. CNN, CBS, and ABC are also beefing up their coverage. But none are covering suppression where it could appear with the frequency it deserves: with the daily and, in cable’s case, hourly recitation of poll numbers.
What’s the real margin of error if, more than ever, pollsters’ “likely voters” are less likely to have their ballots counted or be able to vote in the first place?

Here’s an idea: Make coverage of voter suppression as central to TV’s election news as the polls. Join them at the hip. The addictive horse-race news could run alongside the less glamorous but equally urgent reporting on voter disenfranchisement. Polling data and voter suppression are inextricably linked, the latter serving as context and caveat to the former. What’s the real margin of error if, more than ever, pollsters’ “likely voters” are less likely to have their ballots counted or be able to vote in the first place?
https://tpc.googlesyndication.com/safeframe/1-0-37/html/container.htmlSponsored VideoWatch to learn moreSponsored By ADVERTISING PARTNER

How might this work? After running down new numbers from Wisconsin, for instance, Norah O’Donnell or Don Lemon could brief viewers on recently restored, Republican-pushed voting restrictions, including slashing early in-person voting from six weeks to two, which could create longer lines at already congested urban polling places. Or they might follow a first-time voter jumping through a succession of hoops to vote absentee during the pandemic, such as getting a valid photo ID, which often means going in-person to a DMV with reduced hours and days of operation; requesting an absentee ballot by submitting a copy of the ID; or finding a witness to watch them fill out the ballot.

The press at large didn’t do well by Wisconsin and its contentious voter ID law in 2016. Hillary Clinton lost the state by just 23,000 votes, while the ID law, one of the most stringent in the nation, deterred between 17,000 and 23,000 eligible voters in the two most populous counties from casting ballots, according to a 2017 study. The study didn’t look at other counties or at how those surveyed might have voted, but its principal author told the Times, “it’s certainly possible that there were enough voters deterred that it flipped the election.”

Unsurprisingly, the study also found that the law “disproportionally” kept low-income and African-American citizens from voting. And yet, as voting rights expert Ari Berman has written, while “pundits on the right and left” blamed low Black turnout on Clinton’s inadequacies as a presidential candidate, “Voter suppression efforts were practically ignored, when they weren’t mocked.” While it’s impossible to prove whether Clinton lost the state because she didn’t visit it enough or because widespread voter suppression flipped the election to Trump, for the media to dismiss the evidence of major disenfranchisement is to foster its growth.

Print, radio, and online media all need to step their voting-rights game. But television news has some particular debts to pay. Four years ago, TV was airing wall-to-wall coverage of Trump—CNN and MSNBC often ran his rallies live and in full—giving him $2 billion of free media and themselves a nice profit. (As disgraced former CBS chair Les Moonves put it, Trump’s candidacy “may not be good for America, but it’s damn good for CBS.”) They’ve noticeably improved in this election cycle. When pre-Covid Trump was still performing before thousands of jam-packed, maskless devotees, most channels this side of OAN were showing only clips of his rallies. to learn more.

But Big TV’s on-again-off-again attention to GOP efforts to steal the vote from people of color, students and Democrats in general could undermine the media’s relative progress. This is the first presidential election in almost 40 years without a federal court consent decree banning the Republican National Committee from sending poll watchers, including armed off-duty cops, to intimidate primarily Black and Brown voters. Now, in the electoral stylings of Jim Crow, the RNC is recruiting 50,000 watchers, and Trump has been exhorting “sheriffs,” “law enforcement,” and an “Army for Trump” to descend on polling places and hunt down virtually nonexistent “voting fraud.”
It’s difficult for television to do journalistic justice to the multifaceted and hard-to-quantify story of voter suppression.

It’s difficult for television to do journalistic justice to the multifaceted and hard-to-quantify story of voter suppression. Having anchors read polling numbers as panelists dissect them is an easy way to cover American politics while still appearing granular and diligent. Some mainstream newscasters may fear that focusing too intensely on voter suppression might seem partisan because it can’t be said that “both sides do it.” Moreover, concentrating on voter suppression could make media professionals feel like they’re undermining faith in the electoral system.

But we can’t defend democracy with the last election’s etiquette or format. If Donald Trump has taught us anything, it’s that repetition works. The news needs to get proactive and hammer home, again and again, the fact that voter suppression is real, intentional, and an ongoing, well-funded project of the Republican Party.

The news could be creating a more realistic and complete picture of this election by more frequently weaving reported stories about voter disenfranchisement together with typical horse-race fare. But news shows might take any number of tacks to blend voter suppression’s warp with polling’s woof. Follow the lead of “Vote Watch” and produce segments on voting-rights and disenfranchisement. Give the attacks on voting the round-the-clock treatment that CNN gave to missing airplanes. Let Steve Kornacki and John King go at it with dueling touch-screen maps, loaded with up-to-the-minute information on voter suppression. Or take former Washington Post executive editor Leonard Downie, Jr.’s advice that the press “cover voting as much or more than it covers the rest of the campaign.”

However TV does it, the key is to do it regularly—at least as regularly as the polls are covered—every day, on every show. God knows there’s enough to work with. Between mail-in chaos, restrictive voting laws, intimidation, cyber attacks, cuts to polling places and early voting, poll taxes for Florida’s ex-felons, foreign interference, overwhelmed local election officials, confused voters, court cases, a weakened Census, social media disinformation, and whatever new frontier of democratic values the GOP decides to trash next, there’s ample material to fill a daily segment or two from now through Election Day, as well as the months of crazy to follow.

The best weapon against suppression, in all its forms, is voter education and massive turn-out. And one of the most important lessons from both the 2008 financial crisis and this year’s coronavirus pandemic is that large, complicated stories can only really be told when reporters put flesh and blood on the numbers that slide across spreadsheets. Polling coverage is no different: The probabilistic predictions of pollsters ultimately depend on actual people being able to realize their intentions at the ballot box. In this way, messing with the sanctity of our elections is not just a corrupt act that hurts voters, it hurts journalism as well. To help preserve both of these institutions, the news needs to amp up its coverage of the war on voting: repeatedly, regularly, with urgency and without apology.