On the first and third Monday of each month, Theresa Burroughs traveled to Alabama’s Hale County courthouse to register to vote. On each trip, she was met by a group of White men playing dominoes.

One of those men oversaw voter registration in the county. He’d point to a jar of jelly beans on a nearby table and ask Burroughs, “How many black jelly beans are in a jar? How many red ones in there?”

It was the late 1940s, and Burroughs was a Black woman who knew she wasn’t welcome at a voting booth in the Jim Crow South. But she was so determined to vote that she kept going to the courthouse every month for two years until she wore the voter registrar down. When he finally handed her a voter registration card, he didn’t bother to hide his disgust.

More than 70 years later, it still is hard for many Black people to vote in America — and the proof can be seen in how this year’s presidential election has unfolded, voting rights advocates and historians say. 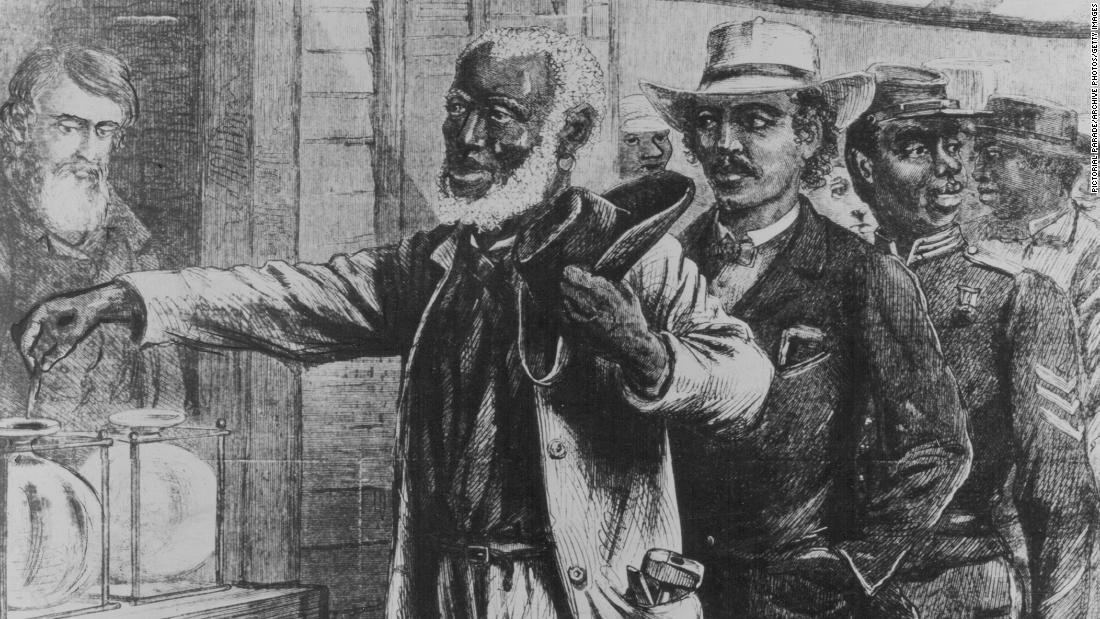 This 1867 illustration from Harper’s Weekly shows African-American men voting in a state election in the South during Reconstruction. Although Black men were allowed to vote after the Civil War, voting rights for African Americans were continually eroded until the 1960s.

The jelly beans test never quite went away; it’s just evolved into more sophisticated ploys. They include allegedly sabotaging the US Postal Service to delay the delivery of mail-in ballots, limiting sprawling counties in Texas to one ballot drop-box location, and passing stricter voter ID laws to combat allegations of widespread voter fraud, even though those claims have been debunked in court and by academic studies.

Voting-rights advocates say those are just some of the tactics that President Donald Trump, Republican politicians and Republican-appointed judges are employing to prevent Black people — and other groups who traditionally align with the Democratic Party — from voting in 2020.Some of these voter-suppression tactics are so similar to the segregated era of Burroughs’ youth that some observers are calling them “Jim Crow 2.0. When it comes to roadblocks to voting, there are at least four unsettling parallels between the Jim Crow era and now.

Laws that prohibit ex-felons from voting

Back then, many segregationists didn’t bother with clever tricks to keep Blacks away from the voting booth. Raw terror was their preferred method. They routinely employed beatings, mob violence, and murder to keep Black voters from the polls.White politicians began attacking Black voting power after the 15th Amendment granted Black men the right to vote in 1870. They transformed the post-slavery-era South into an apartheid state where Blacks were reduced to another form of servitude, the Rev. Martin Luther King Jr. once observed.

“So long as I do not firmly and irrevocably possess the right to vote, I do not possess myself,” King said in a 1957 speech. “I cannot make up my mind — it is made up for me. I cannot live as a democratic citizen, observing the laws I have helped to enact — I can only submit to the edict of others.”…

Another common weapon in the Jim Crow voter-suppression toolkit was the “poll tax.” Southern states passed laws requiring the payment of a fee to vote. Many Blacks, not long removed from slavery, were too poor to afford the fee. They couldn’t exercise a fundamental right simply because they didn’t have enough money.

Some critics say Republican lawmakers have created a modern-day poll tax in Florida by passing a “pay to play” approach to voting for ex-felons.

In 2018, Florida voters approved Amendment 4, which granted convicted felons who complete all terms of their sentence, including parole or probation, the right to vote — except those convicted of murder or a felony sexual offense.The Republican controlled-Florida legislature, however, passed a law the following year that required ex-felons to pay all financial obligations before they could vote. Critics say this places an unfair burden because the state of Florida has no reliable way to tell ex-felons how much they owe. Many of the records used to sentence prisoners are lost or are inaccessible, critics say….

People would arrive at the polls to discover they were no longer registered to vote and could not re-register until after the election.

Southern states also rewrote voter-registration guidelines in the late 19th century to make it more difficult for Blacks to register to vote through barriers such as “good character tests” or property qualifications.

A property qualification was a thinly disguised way to keep Blacks from voting since many back then were too poor to afford property, while a “good character test” usually meant that a White voting registrar had the sole authority to decide who had the right “moral character” to vote (Blacks rarely had the right moral character)…

A Supreme Court that has hampered voting rights

None of the voting suppression tactics of the Jim Crow era would have been possible without the cooperation of the US Supreme Court. Any student of history reading about the high court’s decisions in the 19th century would be struck by its hostility toward Black voting rights.Lawrence Goldstone, author of “On Account of Race: The Supreme Court, White Supremacy, and the Ravaging of African American Voting Rights,” said the court in the 19th and early 20th century “contented themselves with taking refuge in parsing language” while producing decisions that ignored what almost everyone could see: Blacks were being defrauded, beaten and murdered while trying to vote.”What they were doing was hiding behind language to avoid the intent of the Constitution, which is to grant equal justice,” Goldstone told CNN.Republican-appointed judges are engaging in a similar “see no evil, hear no evil” approach today, voting rights advocates say.A conservative majority on the Supreme Court issued a 2013 decision in Shelby County v. Holder that gutted the chief enforcement mechanism of the most important law passed during the civil rights movement — the 1965 Voting Rights Act.

There are some who say the struggle for voting rights is ultimately a battle to preserve democracy.Commentator Ezra Klein wrote in a recent essay that the Republican Party has concluded that “mass democracy is inimical to their interests” because their ideas no longer command popular support.

Their solution, he wrote: Appoint judges that will make voting harder for groups that don’t traditionally support Republicans.”

A party that wins power even as it fails to win over voters will quickly turn against democracy itself,” Klein says. “And when that happens, it will use the power it has to make it yet easier to win power without winning voters. And so the Republican Party is.

“Brooker, the political scientist, says the future of voting rights may be in the past. As the country becomes more racially diverse, conservative White lawmakers and judges will come up with clever new ways to discourage Black people from voting, he says.”

I don’t know what the next one is,” Brooker says of voter-suppression tactics. “But there’s always another scam down the road.”

They may no longer use jars of jelly beans, but the game remains the same.

THE PUSH AND PULL OF BEING A BLACK REPUBLICAN IN THE TRUMP ERA. There have always been Black conservatives and Republicans. In the Trump era, being one is a balancing […]
NBC News

THE TURMOIL OVER ‘BLACK LIVES MATTER’ AND POLITICAL SPEECH AT COINBASE. The CEO of the cryptocurrency pioneer declared political discussions out of bounds—then gave employees a week to agree or […]
Wired
%d bloggers like this: